What is Commercial Law - Explaination 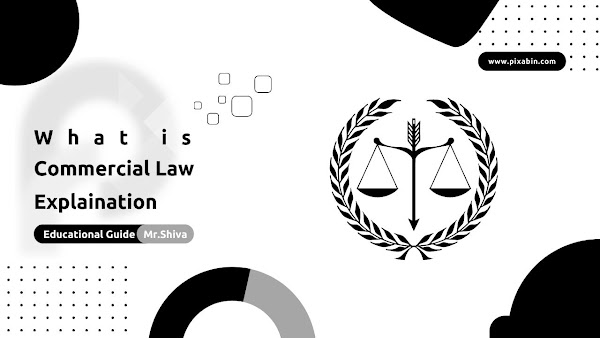 Meaning and Definition of Commercial Laws

'Commercial Law' or 'Business Law' or 'Mercantile Law' are all terms in relation to the law that is used in the same sense. Business law is a branch of General Law. Business law consists of legal rules that govern and regulate business activities, transactions, and trade. It also encompasses the law relating to the regulation of business associations and other incidental matters. It relates to industry, trade, and commerce.

It includes laws relating to contracts, sale of goods, partnerships, negotiable instruments, companies, cooperative societies, etc. It also includes laws relating to joint stock companies, carriage of goods, insolvency, and arbitration. Business law may be defined as that branch of law that prescribes a set of rules for the governance of certain transactions and relations between:

According to S.R. Davar, "Business law means that branch of law which is applicable to or concerned with trade and commerce in connection with various mercantile or business transactions".

According to Prof. A.K. Sen, "Business or Commercial law includes the law applicable to the ordinary transactions of merchants, bankers, and traders, and denotes that branch of the law, which relates to the rights of property and the relations of persons engaged in commerce".

The following laws are included in mercantile laws:

8) Carriers and Carriage of Goods Act

Sources of commercial law are as follows:

1) English Mercantile Law: Lex mercatoria is a Latin expression meaning 'law merchant'. In a business context, it refers to a body of trading principles used by the merchants throughout Europe in the medieval ages. Evolving from a system of customs and best practices, it functioned as the international law of commerce. It was enforced through a system of merchant courts along the main trade routes. The English Mercantile Law constitutes the foundation on which the superstructure of the Indian Mercantile Law has been built.

2) Statutory Law: Statutory law is a written law enacted by the legislature or other authorized governing body such as the executive branch of the government. Statutory law contains all laws enacted to facilitate, regulate or clarify the process of governance, to improve civil order, codify or amend existing laws, or to grant special treatment to an individual or company. In the Indian context, all laws are statutory. When a 'Bill' passed by the Parliament is signed by the President of India, it becomes an 'Act' or a 'Statute'. The bulk of Indian Mercantile Law is statutory law.

3) Judicial Decisions: The past judicial decisions or precedents of courts are essential sources of law. Sometimes existing statutory provisions are not adequate enough to resolve an issue. In such cases, the court adjudicates according to past precedents on similar matters. The precedents set by the higher courts have a binding force on lower courts and the precedents set by the courts of the same status like High Courts of different states, exercise persuasive power over each other.

4) Customs and Usages: Like all other aspects of human activities, business and trade also rely heavily on customs and usages, practices, and business dealings related to a particular trade. In many cases, such practices acquire a binding and legal force on the parties.

For example, as per the mercantile usage prevailing in the Delhi Iron Market among big merchants, no interest can be charged on the unpaid price for transactions before 1917. However, the custom or usage must be certain, reasonable, and well known to have a binding force.

The importance of commercial or business law is as follows:

1) Business laws specify how different businesses can be set up, how taxes apply to them, registrations, documentation, and requirements; define different terms pertaining to business, making by-laws, and articles of organization among many others.

2) Business law lays down the framework within which business activities shall be carried out. For example, X company issues an advertisement disparaging the products of its rival - Y company. Further X company prohibits its dealers to deal in the products of Y company. These acts of X company are not in conformity with some legal rules prescribed by some statute or the other. Thus, Y company can enforce its right which have been infringed by the X company.

3) A business person can resort to various judicial and quasi-judicial authorities against the government in case his legal rights have been violated.

4) Some laws are made to facilitate business persons to achieve their goals smoothly. For example, a business has been extended the facility of doing business by getting a company incorporated, deriving all the advantages of incorporation, such as separate legal entity, limited liability, etc.

5) Business laws help to prevent the concentration of economic power and help in the adjustment of claims of individuals against each other.

6) Business law helps in the survival and development of an organization and also helps the management in decision-making.

7) Business law provides help in case of any breach of contract by the organisation.

8) Business law provides authoritarian schemes on how commerce should be conducted. Every country has its own regulations, laws, and regulatory bodies or agencies governing the manufacturing, sales, marketing, and distribution of products within the country. Laws and regulations are intentionally made for human beings and other institutions as a guide to bring order and sanity into society. Because of this, it is likely that their application will impact upon the plans of firms; their effects on a given firm are also inevitable.